No products in the basket.
£0.00 Basket
Menu

Arcturus is the fourth-brightest star in the sky. Its diameter is about 27 times that of the Sun, but its mass is similar. It is thought that several billion years from now our Sun will become like Arcturus. It lies 36 light years away in the constellation of Bootes, the Herdsman. Arcturus means bear-guard, for it in the curve described the Plough’s handle, which is part of the Great Bear. However the American poet Emily Dickinson wrote, ‘Arcturus is his other name,- /I’d rather call him star! / It’s so unkind of science / To go and interfere!’

Arcturus is a star of great beauty. Within the Galaxy it has a special role to play, for its light has developed qualities that align with and support the processes of dynamic change our Galaxy is going through. Thus the Arcturians have undertaken a role as galactic healers, gathering up the light of Arcturus and forming it into lightships from which they focus frequencies or qualities of light that assist planets to evolve in alignment with Divine Will.

The light of Arcturus functions a little like zero in mathematics; that is to say, part of its beauty is due to its purity, which does not interfere at all with what it touches, unless there is a call from within the heart of a planet, in which case it accelerates change powerfully, just as a zero placed after a number multiplies it by ten.

One of the key ways in which Arcturian light promotes healing is through appreciation; as the light shines so the beauty of what it reveals is made clearer. The gift of appreciation makes a space that may be grown into. Another of the ways in which the Arcturians use the light of their star to heal is by generating pathways of light across the Galaxy that unite congruent points, somewhat like contour lines on a map. These pathways of congruence are like spiritual trade routes, helping the import and export of qualities like oneness between star systems kept apart by inertial fields. This chosen role of appreciation and sharing promotes the release of illusion and triggers fields of bliss that expand rapidly outwards from every point within the field.

The Arcturians travel these pathways across the Galaxy in their lightships, helping where their help is welcomed. On Earth they help mainly by working with individuals, often connecting in the dream state when the being is more free to travel outside of the physical body. In this state many are able to visit these lightships to receive healing (principally by being helped to disentangle the emotional and mental bodies) and education.

The Arcturians teach the skills of Oneness; they help us to find points of congruence within ourselves by shining the light of appreciation into our human consciousness.

The points of congruence that are revealed are aspects of our own being that exist beyond the limitations of time and space and matter, and the bliss that they generate takes us into Universal Day, the state of consciousness shared by our sister/brother beings in the dimensions above our own. In this way the Arcturians are helping us to ascend, using many very subtle techniques of light to liberate us and to reflect back to us our own beauty of being. 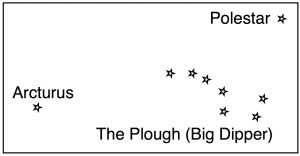 A northern hemisphere star, Arcturus is most easily seen in the Spring and Summer. You can find it by starting at the Plough (Big Dipper) and following the curve of its handle to the left until you come to the bright and yellowy-orange light of Arcturus.